SLIM-IFA-33 rev A
IF Amplifier Module

The SLIM-IFA-33 Amplifier module consists of two separate MMIC amplifiers with a common DC power input connector.  The MMICs have a bandwidth of over 4 GHz, so a 40 MHz low pass filter is included in each output.  At 10.7 MHz, the single stage gain is 20 dB, with a 1 dB compression point output of greater than +13 dBm.  Noise figure is less than 3 dB.  38 ma. of bias current (for each amplifier) is required to maintain these specs.  With +10 volts input to the module, a total of 150 ohms dropping resistance is required.  The dropping resistance is split into two 75 ohm resistors, each dissipating 108 milliwatts.  The split resistors also allow for more input power filtering.
This module was given the suffix "-33" because it specifies using the MiniCircuits ERA-33 MMIC.  However, other MMIC's can be substituted (with appropriate bias component changes). The bandwidth limitation of the circuit can be increased by removing or changing the output low pass filter. The design of 40 MHz was due to the use of this module as a 10.7 MHz amplifier in the MSA. 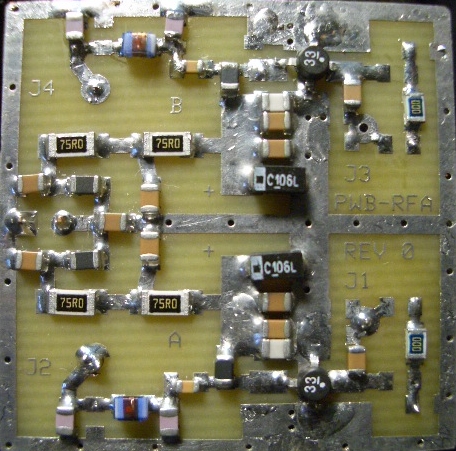 This layout document should be used for locating or placement of components.  It should not be used for ordering the PWB from Express. You may notice in the photo, I did not install R22 and R23 (R32, R33) and placed C8 (C18) directly from the input connector to the input of the amplifier.

Plot of Gain of both stages in cascade and phase vs. frequency sweep. 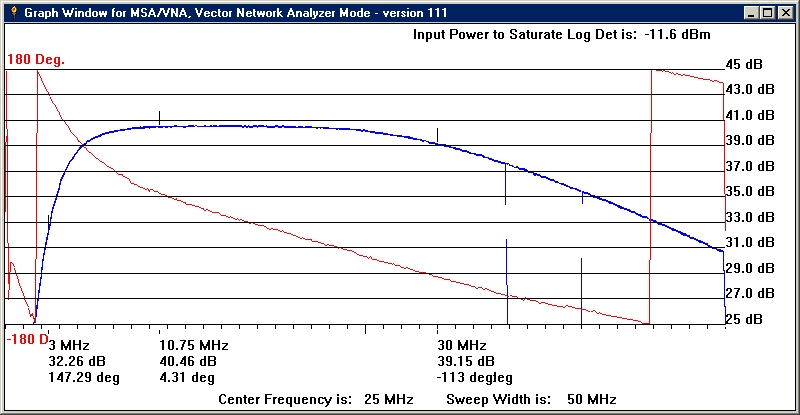